Eden Inn is situated in the Neveh Remez neighborhood. Like many hotels in Israel, it was originally built in the 1950s by a health maintenance organization as a convalescent home. It was built for the construction union workers and run by the Beit Remez, the construction workers’ pension fund.

Currently an extremely desirable area, Neveh Remez was in those days a modest neighborhood populated by blue-collar workers (Shikun Neveh Oved Alef). The community was founded in 1947, but only upon the construction of Beit Remez was the neighborhood hooked up to the country’s electrical grid. Beit Remez functioned as one of the most important institutions in the community at the time. 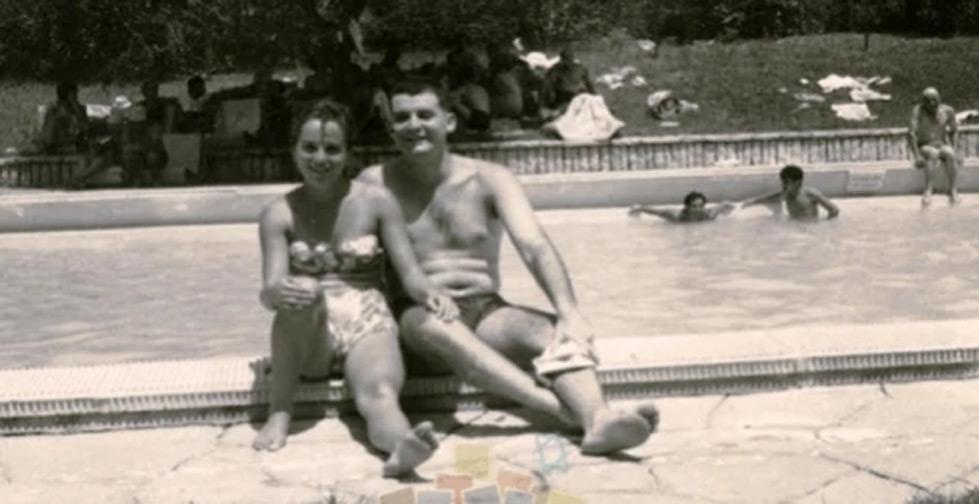 Zvia and Danny Ludmer relaxing in the pool at the Beit Remez Convalescent Home in Zichron Yaakov, 1962. (copyright Israel Revealed to the Eye)

In the 1990s, Beit Remez served as an absorption center for 300 new olim (immigrants) from Ethiopia who had arrived in Zichron Yaakov as part of “Operation Solomon.” Afterwards, the complex was sold to a company called Hartan, which reopened the complex as a glatt kosher hotel they named Eden Inn. When Hartan began struggling financially, the complex was sold to a private entrepreneur and Eden Inn was reopened in a new format as a guest house. Eden Inn was gradually renovated and transformed into its current form as a green hotel in nature.

The Beit Remez convalescent home contributed tremendously to the neighborhood in terms of infrastructure; providing many jobs for local residents. But more than anything, Beit Remez was responsible for creating a feeling of community among the residents, serving as their cultural center. The neighborhood was home to immigrants from Romania, Poland, Morocco, Turkey, Iraq, and Libya, along with old-timers who’d already been living in the moshava (farming community) for years. It was a true melting pot, and as a result, the children in the neighborhood were exposed to a broad range of languages and cultures; benefitting greatly from the open, pluralistic atmosphere.

The children in the neighborhood would climb up the water tower and enjoy the swimming pool. They would go exploring in the surrounding nature, play in the open areas, attend performances staged at the center, and at times even enjoy meals in the Beit Remez dining hall. The neighborhood’s unique character was formed in large part thanks to the convalescent home.

Beit Remez was named for David Remez (1886-1951, born David Drabkin) who was involved with trade unions for about 30 years, beginning in the 1920s. Remez was a signatory of Israel’s Declaration of Independence, Minister of Transportation in the first government, and Minister of Education and Culture in the second government. He was the founder of “Solel Boneh”, and in the period between the two world wars was one of the supporting pillars of the Histadrut (trade unions national organization).

During the First World War, Remez moved with his wife to Zichron Yaakov. He was a laborer and worked, among other things, treating exiles from Tel Aviv-Jaffa. It was at this point that Remez met Dr. Hillel Yaffe, and became his right-hand man in managing public affairs. When the moshava was conquered by the Turks, the Remez family moved to Tel Aviv. When Remez died in 1951, he was buried in Zichron Yaakov as per his last will and testament.

The convalescent home was built as a reprieve for workers from the difficult conditions they lived under in Israel’s early years, namely the long hot summers, dynamic fast-paced lives, wars and terrorist attacks. In those days, the national health fund considered stays at convalescent homes as an extremely important part of healing, and thanks to the advanced social conditions for workers, which were practically unprecedented anywhere else in the world; tens of thousands of laborers and workers were hosted at these centers, at the expense of their employers. An annual vacation was one of the basic privileges the Histadrut offered its members, and was a direct expression of its welfare policies. It was also a type of undeclared attempt made by the Histadrut to control its workers’ free time. The health fund viewed its convalescent home vacations as preventive health care and as a result invested tremendous resources in this department. Beit Remez is considered one of the largest and oldest convalescent homes in Israel.

The statue of David Remez lay neglected and discarded for years on the grounds behind the hotel, until one day the hotel’s new administration decided to pick up the gauntlet and restore the statue to its proper location: in front of the hotel underneath the olive tree, as befits a piece of the moshava’s (farming community) important history, and of the hotel.

The statue of Remez was commissioned from a well-known artist named Jacques Loutchansky, who was elderly and found it difficult to complete the work of art. Loutchansky approached Mordechai Kafri (March 12, 1920 – October 17, 2001) a prominent Israeli sculptor and requested him to carry out the basic sculpting, and just leave the final details of the face for Loutchansky to complete. Kafri did as he was asked; however, Loutchansky never completed the sculpture and it remains unfinished to this day.